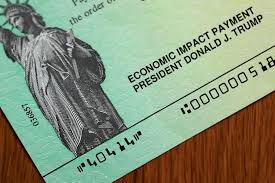 I got my coronavirus stimulus check in the mail–all the way in Europe, where I live and I guess now I gotta vote for Donald.

There are a few caveats, but what the heck, it’s okay that

So, now that your hardworking government has weeded out everyone who actually needs their help, it’s pretty obvious what’s happening.

The major Wall Street banks hoovered up whatever they could in the first seven hours it became available and packaged it off to everyone except mom and pop. After all, mom and pop had already worked most of their lives away trying to build something their kids might want. If the kids had other ideas and took off on their own, at least there’d be something there for their retirement. Sorry about that, Mom, you just weren’t close enough to Jamie Dimon to be noticed. And Pop, you learned the hard way that all this trickle-down nonsense was simply an excuse to cover the fact that American business is designed to trickle-up.

Collectively, the airlines pocketed $60 billion and it still won’t be enough to save them. (CBS news) The Treasury Department’s Payroll Protection Program approved loan applicants from a broad swath of industries. Some that were less directly impacted by the pandemic, such as manufacturing and construction companies, received a greater proportion of the loans than the hard-hit restaurant and hotel industries. Hundreds of law firms and private equity companies also obtained the forgivable, 1% loans. Businesses owned by politicians also borrowed from the program, including a minor league baseball team owned by the family of the governor of Ohio. A large franchisee of Wendy’s, Taco Bell and Pizza Hut restaurants, whose CEO is a major donor to President Donald Trump, received loans totaling $15 million to $30 million.

Ah, here we go again with the proof that Mark Twain was absolutely correct a hundred years ago when he said “It could probably be shown by facts and figures that there is no distinctly native American criminal class except Congress.”

But all that still begs the question of what to do with this twelve-hundred bucks to most effectively stimulate my circumstances. Pay a month’s rent? Find a casino roulette table and put it all on Black? Break it into hundred-dollar bills and slip it to twelve homeless folks under six bridges? I find that last option the most appealing, but I’ll probably just stuff it in the cookie jar–grateful that I even have a cookie jar.